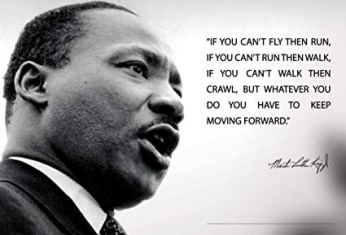 They say that hindsight is 20/20. Sometimes, it is easier to see more clearly what is really going on in the world when we are looking back. They say history is the best judge. I believe this is particularly true when it comes to faith.

The presence of God seems to be more recognizable when we look back.

Looking back, we say: “If it were not for God’s abiding presence, there’s no way I would not have gotten through that!” “During the storms of life, at the time it was difficult to see God, but looking back it was obvious that God was undeniably present.”

Looking back, we clearly see God’s hand during the divorce, through the sickness, in the miscarriage, at the death.

Looking back, we plainly see God helping us to learn from mistakes, grow from painful experiences.

Looking back, we see God working all things together for the good, wringing whatever good can be wrung out of life’s most difficult moments.

Looking back, we can see God, reconciling, creating, recreating, resurrecting.

Looking back, we say, “Yes, I am a better person today because what happened yesterday. Although, I could not see it at the time, that period of struggle was the best thing that happened to me.”

Which raises the question about today? Where is God in the present? What is God doing in our lives at this very moment? What is God up to in the world today? And the more important question, are we able to see it? Or do we have to wait 5-10-20 years to see it?

This may have been what was going on with the Israelites when Isaiah preached the sermon in our scripture lesson this morning.

Some scholars believe the Israelites were on their way back from exile in Babylon. They were on a long and treacherous journey through a desolate and dangerous wilderness. Food, water and shelter were scarce. Protection, minimal. So it was not uncommon for people die in the wilderness.

Then Isaiah proclaimed: “The same God of the great Exodus who liberated your ancestors from Egyptian slavery by making “a way in the sea, a path in the mighty waters” (Isa 43:16) promises to do something brand new: God will make a “way in the wilderness” (Isa 43:19).

“So, stop looking back on those good old days, where God’s presence was so clear, so evident and so real, because God is working even now to create good new days! Bring your faith in the God of the past into the present!” preached Isaiah.

Other scholars believe the prophet was addressing Israelites who had already made it back to Jerusalem, and instead of finding the home they remembered and loved, they found an abandoned city in ruins. Having made their dangerous journey through the wilderness, they found themselves in even more danger. Rather than the safety and comfort of home, they found themselves constantly threatened by enemies who had taken control of the land in their absence. The stories of Ezra and Nehemiah tell us how dangerous it was for the people who worked to rebuild the ruined city. At one point, Nehemiah encouraged everyone working on the rebuilding of the city to carry swords for protection (Neh. 4:17-18)!

So, the prophet was preaching: “You can’t go back, but the same God you clearly see in the past is about to do something brand new to help you move forward with God into a new day!”

But moving forward is what our faith is all about, and it is what it has been about since the very beginning. Once Adam and Eve obtained the knowledge of good and evil, there was no going back, no undoing it. It’s like they say, once you see something there is no unseeing it.

But, in the shame of who they were and what they had become, hiding naked and exposed in the trees, God finds them, then with God’s own hands, makes garments of skin and graciously clothes them. Adam and Eve cannot go back to the good old days of blissful paradise, but now clothed with grace, by the very hands of God, they can go forward with God into good new days.

Cain kills his brother Abel and is excommunicated to the land of Nod. Cain can not undo what he has done. He cannot go back. But God promises to go with him into a new reality and marks him with grace.

The truth is: most of us right now desperately need to hear these words of God, “Behold I am doing a new thing.”

Isaiah understands this need. He is saying: “I know, life may not good for you right now. Some of you are doubting today that will see tomorrow. Although you have experienced the hand of God in your life before, it’s very difficult for you to see that holy hand now. It is hard for you to keep the faith and move forward.”

“What’s that did the preacher just say? Did he say “new things” and “church” in the same sentence?  New? Doesn’t he know if we’ve never done it that way before, it just can’t be done.

“Behold I am doing a new thing! Can you not see it?”

I believe this may be the most important question we can ask ourselves. “Can we not see it?” Are we capable of seeing the new thing that God is doing in our world? Are we able to open our eyes and see the new world unfolding before us? Are we ready for the new thing that God wants to do in us and through us?

This past week, I read an article that reminded me why this was so important.

On the week of the 51stanniversary of the assassination of Rev. Dr. Martin Luther King, Jr, the article pointed out that the majority of the nation today looks back with reverence and great fondness on Dr. King. We look back, and we can clearly see God at work in him and through him.

However, at the time of his death, Dr. King was one of the most reviled men in the United States. His message of liberation for people of color, Native people and poor people was widely rejected. According to a 1968 poll,75 percent of Americans disapproved of him.

Now, the majority of Americans who were not alive or adults in the 1960’s look back and would like to believe that we would have be in that 25 percent. But would we? Or, back in the mid-60’s would Isaiah’s words convict our hearts, “God is doing a new thing through this young black preacher from Georgia, can you not see it?”

After all, many of the conditions that he marched, boycotted and spoke out against still exist today. Some say that although we’ve made some progress, we have taking a giant step backwards in the last few years when it comes to racism, sexism, materialism and militarism.

And yet, even as we look back today on Martin Luther King Jr with great admiration, much of America condemns the activists today, in the same way he was condemned 51 years ago.

Many detest those today who are speaking out, sitting in, kneeling and marching against the same conditions. If you took a poll today, I believe you would find that the majority of the country disapprove of movements that are demanding justice for Black men, women, and children killed by police, proclaiming that Black Lives Matter. Most people are leery of people crying for justice for women in the #metoo movement. Most are indifferent to justice movements for immigrants and justice movements for Indigenous peoples like Standing Rock, as well as justice movements for trans, binary, and gender-nonconforming people.

Dr. William Barber, who is currently continuing the work of Dr. King’s Poor People’s Campaign, has his life threatened constantly.

Which makes us wonder. What would we have done if we were living in South Africa during Apartheid or Germany in the 1930’s? What would we have thought of Harriet Tubman, Frederick Douglass and Sojourner Truth, or even abolitionists like Barton Stone and Alexander Campbell?

And what would we have thought of that radical Rabbi named Jesus? What would would our conversations be around the dinner table after we heard the reports—of him breaking the laws of the Sabbath? Touching lepers? Including women as his disciples? Demanding that people sell all of their possessions and give them to the poor? What would be our response to his sermon that encouraged people to turn the other cheek, give the shirt off their back, forgive their enemies, love everyone and take up a cross? What would we have said in response to the news from the women who said that he was not dead, but had risen just as he said?

Would we have been able to see God at work in and through Jesus?

Sometimes we are ready to see something and sometimes we are not. Last week, we were reminded that the so-called “Prodigal” son had to hit rock bottom before he could hear God speaking to him. In today’s Hebrew scripture, Isaiah points out that, as wonderful as God’s new thing was, people may have a difficult time seeing it. Which begs the question: What makes us able to see God at work in the world?

Perhaps you heard the story about the guy who bought a pack mule? The seller of the Mule said: “This mule will understand every order you give him. All you need to do is tell him where he should go and what he should do, and he will do it every time.”

The seller looked at the mule, looked at the buyer, then picked up a two-by-four and whopped the mule on the backside and then said “go forward.” The mule went forward.

The buyer said, “what on earth did you do?”

The seller smiled. Then he said, “Well, sometimes you just have to do some dramatic to get the mule’s attention.”

I wonder if that’s applies to us too?

Whatever it takes, I pray that something gets the church’s attention today, right now, so that we are able to see God at work in our world, so we can join God in that work.

For behold God is doing a new thing. Can you not see it? And God wants us to move forward.

And in the words of Dr. King, if we can’t fly, let’s run. If we can’t run, let’s walk. If we can’t walk, let’s crawl. But whatever we do, let’s keep moving forward. Forward together, not one step back.