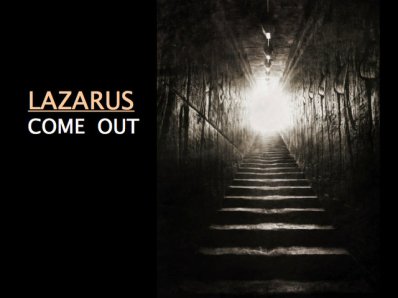 Thus, I love John 11, for here in this very honest chapter, there is no denying the harsh reality of this fragmented existence we call life, especially in dealing with the most tragic aspect of this life: the death of a loved one.

Too many Christians, for many reasons would rather treat the tragedy of death as if it does not exist. We don’t want to talk about it.  And when we do, we try to deny the harshness, the sheer austerity of it. We do not even like to call it “death.” We would rather call it “passing away.”

We say things like: “there are worse things in this world than death;” however, in death there still exists an inescapable starkness that cannot be denied or ignored. When we are honest, we would admit that death is the most difficult thing about life. Losing someone we loved is the worst of all human experiences. We try to comfort ourselves by saying things like, “at least our loved one is no longer suffering.”  “At least she is now finally at peace.”  But if we are honest, just a second later, we find ourselves questioning why she had to get cancer and suffer in the first place. Why did they have to die as young as they did?

And we like to comfort ourselves by saying that he or she is in a far better place. But then a second later, we question why he or she would not be better here with us, at home, surrounded by family and love.

Yes, in John 11, there is no refuting the stark reality of death. Notice that Martha is absolutely horrified when Jesus commands the stone to be rolled back from the tomb. Her horror reminds us of something that we would rather ignore: the body was beginning to decay. The very sound of the words of verse 39 “Lord, already there is a stench, because he has been dead for four days” seems inappropriate to read from the pulpit. Dressed in our Sunday best on a beautiful spring morning, we don’t want to hear that!

But this is reality. This is truth.  And sometimes we simply do not want to hear the truth.

And sometimes we just think it is our Christian duty to be an example to the world, to the weak, to the unfaithful, how to be strong, how to put on a brave face and hold back the tears.

But notice in John 11 that there is no holding back.

Mary, the brother of Lazarus, weeps. The mourners who had gathered at the cemetery that day weep. Even Jesus himself weeps. The harsh reality of death and grief is evident everywhere.

We are told twice that Jesus “was greatly disturbed in spirit and deeply moved.” Is there really a difference there? That is like saying that Jesus was grieving and mourning.

Just looking at the tomb of Lazarus caused Jesus to burst into tears.  Even Jesus, who we believe is manifestation, the very embodiment of God, the creator of all that is, who became flesh to dwell among us, does not remain calm and serene as one unmoved and detached from the fragmented human scene. Jesus himself is deeply disturbed at death’s devastating force. There is no denying it or escaping it or muting it. Neither is there any dressing it up with euphemisms like “passing away” or “gone on to be with the Lord.”

So, I believe John 11 gives each of us permission this morning to grieve. May we grieve long and deeply. May we never dare to run away from it.  May we never treat it as it was some stranger that we could send away, or deny that grief, because someone who doesn’t know any better thinks grieving means our faith is weak. Let us grieve what is lost. Grieve honestly, lovingly and patiently. Let us grieve until our cups are emptied.

However, (and here is the good news for all of us this day) as the Apostle Paul reminds us in his letter to the Thessalonians that those of us who call ourselves Christians should not grieve as others do who have no hope.  As Christians, our grief is real, but our grief is different. Our grief is not despairing, because as Christians, we possess hope because Jesus, who himself was not immune to grief and even death, always brings resurrection and new life.

Those of us who are not immune to grief and death need to again to hear Jesus’ prayer which came in a loud voice.  “Lazarus, come out.”

We need to hear this voice and see this very real and foul, decaying corpse walking out of the grave, still wrapped in burial cloths, coming, at the voice of Jesus, to life.

Then, I believe we need hear John and Jesus himself tell us over and over that this event reveals the glory of our God. What we have in this story is much more than the resuscitation of one dead corpse by one man.

Always for John, miracles are much more. Miracles are always signs that point us to something greater. Thus this miracle is the revelation that the God in whom we serve and trust and love, this God who is not unmoved and detached from the human scene, is always a death-overcoming and life-giving God.

The good news that we need to hear is that this God is still working in our world today unbinding, letting go, loosing, freeing. God is here enabling us to confront death and grief, us to acknowledge it, to look it straight in the eyes, to see all of its harshness and starkness, and then be liberated from it.

And if God is here liberating us from the shackles of death, then there is nothing else in all of creation from which God cannot set us free.

From evil bullies bent on crushing our spirits.

A job that is draining the very life from us.

A relationship that is killing us.

Fears that paralyze us.

Disease that is destroying us.

One of the great things about being a pastor is how I have the awesome privilege to witness this good news all of the time.

Someone loses their job. They come to me believing it is the end of the world. But a year later, working a new job, they share with me that losing that job was the very best thing that could have happen to them.

Someone else comes to me and says that their marriage has fallen apart. And that they are partly to blame. They said they thought life as they knew it was over. But a few months later, they tell me that they are beginning realize that although they cannot go back to the good old days, they have plenty of good new days ahead.

Someone comes to me sharing their deepest fear: the fear of being known for who they really are; the fear of rejection and ridicule. Then I see them a short time later, and they tell me how they have been surprised by unconditional love and unreserved acceptance.

People call me to share their doctor’s grim diagnosis. They say that they had just received a death sentence. But a short time later, I visit with them, and they tell me that they are beginning to understand that being alive and whole have very little to do with physical well-being.

And then I have visited with countless people as they are facing what is certainly their final hours on earth, and I hear in their voices, and I see in their eyes a faithful awareness that there is nothing at all “final” about them.

Thus, like Lazarus, in this incomplete and fragmented world where death, divorce, disease and hate entomb us, we can be loosed. We can be freed, and we can be unbound.

Let us pray together…

O God of New Life, may we be a church that shares this good news with all people, honestly and truthfully and faithfully. May we weep with those who mourn. May we be deeply moved with those who are afraid. And may we be deeply disturbed in our spirit with all who are suffering. Stay beside them. Befriend them. Accept them. Love them…until they are whole, liberated and fully alive now and forever through Christ our Lord. Amen.